From JacksonHeights.nyc
Jump to navigation Jump to search 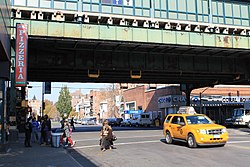 The eastern end of the IRT Flushing Line station, at 75th Street and Roosevelt Avenue

The elevated IRT Flushing Line station opened on April 21, 1917, as part of an extension of the line from Queensboro Plaza to 103rd Street–Corona Plaza under the Dual Contracts.[1] The IND Queens Boulevard Line station opened on August 19, 1933, as part of the IND Queens Boulevard Line's initial segment, from the 50th Street station in Manhattan to Jackson Heights in Queens. Upon the opening of the Queens Boulevard Line station, a transfer between the two lines was implemented.[2][3][4] The station was the Queens Boulevard Line's terminus from 1933 until an extension east to Union Turnpike opened on December 31, 1936.[5][6][7] An uncompleted upper level station was also built along with the completed lower level station.[8][9][10] The construction of the new Roosevelt Avenue complex led to increased demand for housing in the area.[11] It also inspired plans for a proposed shopping mall nearby, which was ultimately not built.[12]

The Victor Moore Arcade,[13] a streamlined local landmark where passengers could transfer from the new IND subway to buses for distant neighborhoods and for LaGuardia Airport,[14] officially opened on December 11, 1941.[13] The two-story bus terminal and arcade, located at the triangle formed by Broadway, Roosevelt Avenue, and 75th Street,[13] also featured a shopping area.[13] The structure was named after Victor Moore, a notable Broadway actor and Queens resident[13][15] who had appealed to build a bus terminal in his name along Broadway and near the station.[16] It served as a hub for the operations of Triboro Coach.[17]

On May 2, 1970, an out-of-service GG train collided with another GG train in revenue service on the Queens Boulevard Line. The revenue-service train was switching from the southbound express track to the local track (it had been rerouted around the out-of-service train). Two people died and 71 were injured in the worst subway collision since the 1928 Times Square derailment.[18][19][20] Following the 1970 accident, New York Magazine highlighted the state of the subway system in a lengthy expose, in which it concluded that the subway's condition was getting worse compared to previous years.[18]

Construction on a new station building at that site began in 2001[21] and completed in 2005,[22] based on a design by Stantec.[23] During the renovation, the bus terminal was closed; the Flushing Line platforms and the bus terminal were completely rebuilt; and the Queens Boulevard Line platforms were refurbished[22] by construction firm Skanska[24] for a total cost of $132 million.[25]

The station complex consists of two separate stations, connected by escalators, stairs, and elevators. The main entrance, a station building bounded by Roosevelt Avenue, 75th Street, Broadway, and 74th Street, includes the Victor A. Moore Bus Terminal.[21] The new station building is one of the first green buildings in the MTA system, which is partially powered by solar panels built into the roof.[22][23] The building is made of recycled material such as concrete consisted of 15% fly ash and steel that was prefabricated; in addition, the builders recycled 86% of the waste materials.[23] The station building also contains some retail space at the corner of 75th Street and Broadway, and also leases a few other spaces between the fare control area and the bus terminal.[25]

Two stairs and an elevator, from each of the Flushing Line platforms, lead down to an aboveground landing, whereupon a set of stairs leads to the main station house, which also contains the station agent booth.[26] The Flushing-bound platform's elevator leads from the Flushing-bound platform to the aboveground landing, then to the street level fare control, and finally to a landing between the street level and the belowground Queens Boulevard Line mezzanine.[27] The full-time station agent booth, and two banks of turnstiles for fare control, are located in this station house at street level.[26][27] Two escalators also lead directly from the Flushing Line landing to the Queens Boulevard Line mezzanine.[27] From the mezzanine, various stairs lead down to each of the Queens Boulevard Line platforms, and an elevator from the belowground landing leads to the mezzanine and the Manhattan-bound platform. There is another elevator from the Forest Hills- and Jamaica-bound platform to the mezzanine.[27] There are also some stores and an ATM lining the mezzanine within fare control.[27]

The 2004 artwork in the station house is called Passage by Tom Patti, and was designed in conjunction with FX+FOWLE Architects. The artwork consisted of trapezoid-shaped laminated glass panels located on the upper part of the building's eastern facade. The glass panels break up light into different colors, depending on the vantage point.[28][29]

At 73rd Street and Broadway, on the north side of Roosevelt Avenue, a set of stairs from each of the IRT Flushing Line platforms lead down to a landing below the elevated structure.[27] There is a connection to the Queens Boulevard Line mezzanine via three long, narrow escalators, where there are exits from the below-ground fare control points.[26] 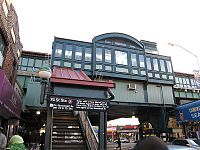 74th Street–Broadway (originally Broadway) is a local station on the IRT Flushing Line of the New York City Subway. It is served by the 7 train at all times.[26][31]

The Flushing Line was opened from Queensboro Plaza to 103rd Street – Corona Plaza on April 21, 1917, with a local station at 74th Street.[1]

74th Street is a local station on the IRT Flushing Line that has three tracks and two side platforms.[26] The center track is used by the rush hour peak direction <7> express service, but trains do not stop here,[31] although there are track switches at either side to let express trains stop there in case of emergency or to allow transfers when work on a local track forces trains to run express.[33] It is served by the 7 train at all times.

The station has two fare control areas at 73rd Street and two at 74th. The 74th Street mezzanine has a wooden floor with windscreen on the stairs, a booth, and a crossunder, with stairs to both the new station building and to the northeast corner of 74th Street and Roosevelt Avenue.[26] The 73rd Street mezzanine contains wooden stair walls, no windows, and no booth (the booth being in the IND entrance at street level). The canopy at the west end is different, having been added later than the original canopy.[26] 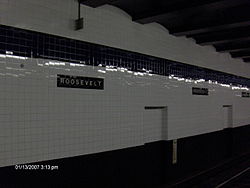 The outer track walls have a blue color stripe with a black border and relatively new, 2-tile-by-10-tile black-on-white name tablets stating "ROOSEVELT" at regular interval. The platforms' I-beam columns are painted in blue, but some columns are encased in concrete and covered with white tiles.[27] The fare control is in the center of the full-length mezzanine above the platforms and tracks, with unmanned High Entry-Exit Turnstile (HEET) entrances at the southeast end of the mezzanine, and a turnstiled exit with a booth at the northeast end. There is also a HEET entrance in the center of the mezzanine.[27]

Along the ramp leading to the southeastern fare control, there is an unused and uncompleted Roosevelt Avenue terminal station for the IND Second System directly above the Manhattan-bound platform.[8][9][10] This terminal has an island platform with a trackway on each side. There are no rails in the trackbeds, but tiles depicting the station name on the tile walls are present.[9][34][35] The signs hanging over the platform, however, are blank. East of the station lies a long, dark section of a 3-block-long tunnel[9][34][36][37] with provisions for a crossover[34][38] and a ramp down to the Manhattan-bound local track of the active mainline below.[39] The unused tunnel has about 750 feet (230 m) of trackway. Along these trackways, trains from the lower level tracks can be seen.[40] The never-used upper level platform is around 500 feet (150 m), only long enough for eight 60-foot (18 m) cars rather than the IND maximum of 10.[34] The platform itself has been converted to offices and storage.[9][41]

There is a trackway just east of Roosevelt Avenue that diverges away from the Manhattan-bound local track. The trackway ramps up to the same level as the two trackways coming from the never-used Roosevelt Avenue Terminal,[39] making three trackways on the upper level. The ramp flies over the mainline tracks along with the two other trackways. Between 78th and 79th Streets, the three trackways on upper level curve towards the south and ending at the wall at the edge of constructed subway. There is a diverging bellmouth next to the Jamaica-bound local track several hundred feet north of the station just at the location where the three upstairs trackways are crossing over. This bellmouth also curves towards the south and similarly ends on a concrete wall shortly after the start of the bellmouth.[42] At the end of the unused tunnel there is an emergency exit[43] that opens out to the south side of Broadway across the street from Elmhurst Hospital. The four-track subway running south was a plan for a line along the Long Island Rail Road right-of-way to Garfield Avenue and 65th Place. The line would have turned along 65th Place to Fresh Pond Road and then along Fresh Pond Road to Cypress Hills Street. The line would have merged with the Myrtle–Central Avenues Line to the Rockaways proposed in 1929.[34][44][45][46] All four trackways end at a concrete wall where they begin to diverge from the excavation for the existing line.[9]

East of this station, next to the southbound track, the bellmouth with the ramp ascending to the upper level once had a layup track on it.[46] On the Roosevelt Avenue interlocking machine in the station tower, there are spare levers for the necessary signals and switches. On the southbound local track, there is a homeball signal, "D1-1415", which has the lower portion lenses covered over and now functions as an automatic signal. The interlocking machine still shows evidence of the now-nonexistent interlocking where the Winfield spur was to have turned off from the D1 track and the D2 track.[47]

Inside the Victor A. Moore Bus Terminal attached to the station

The Victor A. Moore Bus Terminal,[22] which replaces the earlier building known as the Victor Moore Arcade,[13] is located within the station building at Broadway and 74th Street.[22] Seven bus lanes, with stops in or near the terminal, provide easier transfer to the subway and bus connections.[48] Lanes 1 through 3, which serve three of these bus routes, are located inside the terminal. Lanes 2 and 3, which serve the Q49 and northbound Q70 SBS buses respectively, can accommodate one bus each, while Lane 1, which serves the Q33, can accommodate two buses. The Q32, Q47, and southbound Q70 SBS buses stop on Roosevelt Avenue, while the Q53 and southbound Q47 stop on Broadway.[48] All buses from the terminal are operated by MTA Bus, successors to the Triboro Coach routes, except the Q32, which is operated by New York City Bus.[48]