Community Emergency Response Teams (CERT) are groups of volunteers who help to prepare their neighbors for different types of disasters. In NYC CERT falls under the Community Outreach unit within New York City Office of Emergency Management, the City's coordinating agency for organizations and agencies involved in emergency planning, education, and information dissemination.

An equipment trailer belonging to the Springfield, Illinois CERT program.

New York City's government takes the position that emergency services personnel are the best equipped to respond to disasters with NYC CERT volunteers trained to support the efforts of New York City's first responders. In partnership with FDNY and NYPD, NYC Emergency Management has taken the national program and adapted it to reflect the unique circumstances of living and working in New York City. Risks and hazards in NYC are different from anywhere else in the world. New York City also has more first responders than most other areas in the country, so NYC CERT members support them rather than respond themselves.

In New York City, Emergency Management's Watch Command unit deploys teams to emergencies and planned events. According to preliminary reports in the New York Times, the October 1, 2017 shooting massacre in Las Vegas showed that, in some instances, advantage is derived from broad, general preparedness and self-activation, see After the Las Vegas Shooting, Concertgoers Became Medics.

CERT maybe required in circumstances such as the following: 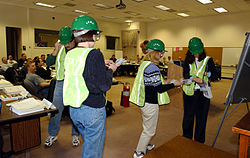 CERT volunteers try on their equipment.

Held on consecutive evenings for 10 weeks within one of the five boroughs, classes are approximately three hours long and are interactive with relevant emergency and disaster discussions and group-building activities based on the Incident Command System (ICS). NYC CERT instructors are active FDNY, NYPD, and NYC Emergency Management personnel.

During the last class of the training, volunteers participate in a disaster simulation that ties the entire curriculum for response and ICS, including live "victims" from active CERTs.

Upon completion of the 10 weeks of training, volunteers are invited to a formal graduation ceremony and proceed to join their local CERT and support their communities by assisting with emergency education and response.

The Federal Emergency Management Agency (FEMA) recommends that the standard, ten-person team be comprised as follows:[1]

Because every CERT member receives the same core instruction, any team member has the training necessary to assume any of these roles. This is important during a disaster response because not all members of a regular team may be available to respond. Hasty teams may be formed by whichever members are responding at the time. Additionally, members may need to adjust team roles due to stress, fatigue, injury, or other circumstances.

When not responding to disasters or large emergencies, CERTs, under the guidance of Emergency Management, may:

Some sponsoring agencies use Citizen Corps grant funds to purchase response tools and equipment for their members and team(s) (subject to Stafford Act limitations). Most CERTs also acquire their own supplies, tools, and equipment. As community members, CERTs are aware of the specific needs of their community and equip the teams accordingly.

The basic idea is to use CERT to perform the large number of tasks needed in emergencies. This frees highly trained professional responders for more technical tasks. Much of CERT training concerns its fit into the Incident Command System and organization, so CERT members fit easily into larger command structures.

A team may self-activate (self-deploy) when their own neighborhood is affected by disaster. An effort is made to report their response status to the sponsoring agency. A self-activated team will size-up the loss in their neighborhood and begin performing the skills they have learned to minimize further loss of life, property, and environment. They will continue to respond safely until redirected or relieved by the sponsoring agency or professional responders on-scene.

Teams in neighborhoods not affected by disaster may be deployed or activated by the sponsoring agency. The sponsoring agency may communicate with neighborhood CERT leaders through an organic communication team. In some areas the communications may be by amateur radio, FRS, GMRS or MURS radio, dedicated telephone or fire-alarm networks. In other areas, relays of bicycle-equipped runners can effectively carry messages between the teams and the local emergency operations center.

The sponsoring agency may activate and dispatch teams in order to gather or respond to intelligence about an incident. Teams may be dispatched to affected neighborhoods, or organized to support operations. CERT members may augment support staff at an Incident Command Post or Emergency Operations Center. Additional teams may also be created to guard a morgue, locate supplies and food, convey messages to and from other CERT teams and local authorities, and other duties on an as-needed basis as identified by the team leader.

In the short term, CERTs perform data gathering, especially to locate mass-casualties requiring professional response, or situations requiring professional rescues, simple fire-fighting tasks (for example, small fires, turning off gas), light search and rescue, damage evaluation of structures, triage and first aid. In the longer term, CERTs may assist in the evacuation of residents, or assist with setting up a neighborhood shelter.

While responding, CERT members are temporary volunteer government workers. In some areas, (such as California, Hawaii and Kansas) registered, activated CERT members are eligible for worker's compensation for on-the-job injuries during declared disasters.

A Teen Community Emergency Response Team (TEEN CERT), or Student Emergency Response Team (SERT), can be formed from any group of teens.[2] A Teen Cert can be formed as a school club, service organization, Venturing Crew, Explorer Post, or the training can be added to a school's graduation curriculum. Some CERTs form a club or service corporation, and recruit volunteers to perform training on behalf of the sponsoring agency. This reduces the financial and human resource burden on the sponsoring agency.

CERT members who are ham operators will coordinate various events using their radios. Locally we have at least one amateur radio club (ARC), at the Garden School. The Garden School Amateur Radio Club formed in 2016. The School's ARC (K2GSG) is an integral part of the school’s curriculum for educating students in STEM (science, technology, engineering, and math) disciplines. The Garden School ARC students are mentored by the Hall of Science Amateur Radio Club, which co-exhibited at the 2017 World Maker Faire. Both are ARRL-affiliated clubs.

NYPD and Other "Street" Cameras[edit]